Complete Cob Workshop in the Mayan Highlands of Guatemala 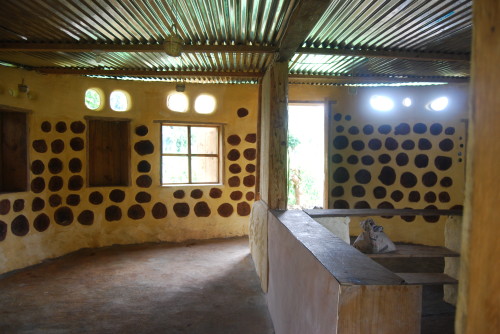 COMPLETE COB WORKSHOP
March 5th-12th, 2014
In the Mayan Highlands of Guatemala
WHAT IS COB?
Earth is probably still the world’s commonest building material. The word cob comes from an old English root meaning a lump or rounded mass. Cob building uses hands and feet to form lumps of earth mixed with sand and straw, a sensory and aesthetic experience similar to sculpting with clay. Cob is easy to learn and inexpensive to build. Because there are no forms, ramming, cement or rectilinear bricks, cob lends itself to organic shapes: curved walls, arches and niches. Earth homes are cool in summer, warm in winter. Cob’s resistance to rain and cold makes it ideally suited to cold climates like the Pacific Northwest, and to desert conditions.

Cob has been used for millennia even in the harsh climates of coastal Britain, at the latitude of the Aleutians. Thousands of comfortable and picturesque cob homes in England have been continuously occupied for many centuries and now command very high market values. With recent rises in the price of lumber and increasing interest in natural and environmentally safe building practices, cob is enjoying a renaissance. This ancient technology doesn’t contribute to deforestation, pollution or mining nor depend on manufactured materials or power tools. Earth is non-toxic and completely recyclable. In this age of environmental degradation, dwindling natural resources, and chemical toxins hidden in our homes, doesn’t it make sense to return to nature’s most abundant, cheap and healthy building material?

From the “Cob Cottage Company”

SITE OF THE WORKSHOP
The small Mayan village of Nebaj is located about 5 hours north of Guatemala city amidst beautiful, green mountains and abundant rivers and springs. It is home to the Mayan Ixil people who have occupied this ancestral territory for 2,500 years. Although the Mayan Ixil people have a very rooted cultural legacy, migration to the United States (mostly by young men) in recent years has begun to bring many aspects of western civilization into Nebaj. One such aspect is related to housing as many Ixil families have given up traditional adobe homes to build “modern” and supposedly superior cement cinder block houses with money sent back from migrants in the US.

The “complete cob workshop” is designed to teach natural building techniques to folks from “the north” who are interested in discovering how to live more sustainably through learning how to build their own homes.
It is also an opportunity to introduce building with cob to young people in the Ixil region of Guatemala as a complement to traditional adobe homes and as a way to stimulate pride in native, vernacular architecture.

THE WORKSHOP
The six day workshop will cover:
• Considerations on picking a house site including passive solar design
• Building a rubble trench and natural rock and lime mortar foundation
• Building cob and “cob-wood” (cob with cordwood) walls
• Putting in windows and doors
• Making natural adobe bricks the ancient-Mayan way
• Creating a poured adobe floor
• Plastering/Sculpting and other creative ways to enliven up your cob walls
• Putting on an anchored roof
• Building a composting toilet with wattle and daub technique

During the workshop, we will be working on three different houses. The main construction will be of a cultural center in a small village located about 20 minutes from Nebaj. The cultural center will be used as a community space for local youth to gather and meet and to share and to learn. We will also be working on another recently finished cob building that serves as an office for a local youth network. At this house we will be re-plastering (both with cob and lime) the finished walls. Lastly, we will work on a poured adobe floor at another recently built cob house in the community.

The workshop, apart from participants from the United States/Canada, will be open to 15-20 local, Ixil youth interested in learning natural building with cob. The more feet we have mixing cob, the faster the walls will go up!

The workshop will be led by Tobias Roberts and Yasmin Méndez who work in the Ixil region of Guatemala with Mennonite Central Committee (MCC). MCC has been working in Guatemala since 1976 in a variety of development, relief, and peace-building projects around the country. In the Ixil region, MCC has supported local, Mayan organizations in small agricultural projects and in efforts to protect traditional lifestyles and defend the rights of the Mayan- Ixil people over their ancestral lands.

Tobias participated in a cob workshop led by Diane Jennings of “Disputanta Cob” in Kentucky in May 2011 and with his wife Yasmin have since built numerous cob ovens, stoves, benches, and a complete cob house that is now the offices for a local network of Ixil youth. They have also been involved in building wattle and daub chicken coops with groups of Ixil youth involved in raising small animals. Local Mayan-Ixil adobe builders will also be involved in leading the part of the workshop related to making adobe bricks.

Guatemala has gained international notoriety as a country reeling with violence from youth gangs and drug trafficking. However, the vast majority of this violence is confined to the urban areas of the country. The town of Nebaj where the workshop will be held is a quiet, peaceful town where violence of any type is a rarity. Workshop participants will be picked up directly from the airport and driven (by van) to the small town of Nebaj which is about 4-5 hours north of Guatemala City. Furthermore, workshop participants will be given the choice between camping near the sight of the construction of the cultural center (free), staying with local
families (free) or staying in a local hotel in the town of Nebaj ($5.00 USD per night).

AGENDA
March 5 Arrival by air to Guatemala City (no later than 100 pm), and van ride to the town of Nebaj.

March 7 AM: Continued construction of cob walls and “cob-wood” walls
PM: Creative/Artistic opportunities for sculpting, creating niches and other means to enliven your cob walls

March 8 AM: Continued construction of cob walls and “cob-wood” walls and installation of windows and doors.
PM: Making natural adobe bricks and building with them.

March 11 AM: Continued construction of cob walls and “cob-wood” walls and sculpting interior wall
PM: Putting on the anchored roof

March 12 AM: Returning to Guatemala City
PM: Flights leaving no earlier than 100 PM

Those that wish to stay after the workshop to travel around Guatemala, we are willing to drop you off anywhere between Nebaj and Guatemala City. Some beautiful tourist sites between Nebaj and Guatemala City to consider would be Lake Atitlan or Antigua (Google them). Of course, any expenses for optional tourist travel are your own and you would be responsible for getting back to the airport by yourself. There are busses and/or shuttles that will take you directly to the airport from both Lake Atitlán and Antigua.

We will begin each day with breakfast a 7:00 AM and begin work around 8:00 AM. We will break for lunch around noon and finish working around 5:00 PM each day of the workshop.

$300.00 USD for individuals wanting to camp near the construction site (must bring your own camping gear) or wanting to stay with local, host families

$340.00 USD for individuals wanting to spend the nights at a nearby hotel with hot water available

The price of the complete cob course covers three meals a day, spring water available all day long, transportation from the airport in Guatemala City to Nebaj and vice versa by van, local transportation to the different construction sites, and all construction costs for the cob workshop including all tools to be used. Workshop participants will also receive a copy of the book “Building with Cob: A step by step guide” by Adam Weisman and Katy Bryce and a DVD with a slide show of photos of assorted cob buildings around the world. Furthermore, workshop participants will have the priceless opportunity to experience the wonderful hospitality of the local Ixil people as well as the opportunity to bathe in the traditional wood-fired sauna baths in the homes of local families.

Due to the cost of round trip airfare that workshop participants must cover themselves, we have aimed to make this course as reasonably priced as possible. The cost of the course covers only the necessary expenses related to food, lodging and construction costs.

If you have further questions regarding the workshop or to receive details about how to deposit the course fee to secure your spot in the cob construction workshop, contact Tobias Roberts at: tobiasroberts20@hotmail.com or at the Guatemalan phone number: 011 502 4808 2561